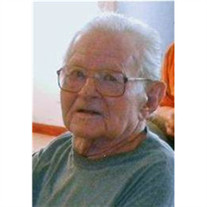 Pat Hardy died peacefully in his sleep October 12, 2011, at the age of 91. Pat was born on July 18, 1920, in Caddo, Oklahoma. He was raised by his grandmother, Grandmother Thomas, along with his brother Mike, who was two years younger and preceded him in death in 1996.

Pat grew up in Caddo, and married his childhood sweetheart and spring love, Nina Faye Crossett, before going off to serve with the Navy in World War II. After the war was over, he returned to Oklahoma to go to college on the GI Bill. Pat graduated from Southeastern Oklahoma University in Durant, OK, earning his BA and teaching credential in Business Education. His family moved to Laverne, Oklahoma, where he taught for two years while earning his Masters Degree in School Administration, after which he and his family moved to Fort Supply, OK, where he became Superintendent. He spent the rest of his life as an educator, ending his formal career as a school administrator at an alternative continuation school in Exeter, California.

Pat retired in 1982, and for a short time lived the life of a gentleman farmer, raising cattle year round, and grandchildren in the summer, outside of Exeter, while his wife and summer love, Frances, grew an amazing garden. Shortly thereafter, they moved to Hemet, California, where they retired to the active community of Sierra Dawn Retirement Estates. He worked for the community in various roles, including President of the home owners association, and was part of their traveling club, traveling around the United States in their motor home. He traveled to Europe to visit his youngest son, enjoyed square dancing, and was very active in the community. Pat continued to be an educator by volunteering at the local school, helping students grow in both reading and math. Active until the end, one could find Pat swimming early in the morning, or taking an evening walk around the community. After Frances Hardy died in 2006, he found love again, and married Vada Gipson, in 2008.